BBAR programs are curated by THEARC Theater to provide arts & cultural experiences which reflect the African and African American diaspora. 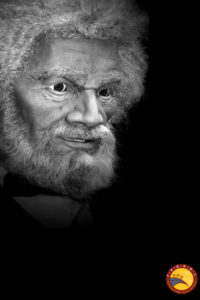 THEARC Theater will showcase our resident Animatronic Historical Figure Frederick Douglass for a limited On Demand series showcasing speeches from the famed orator and abolitionist. THEARC Black Box is home to the only Frederick Douglass Animatron, who recites over 20 speeches and answers 60 questions.
To celebrate the opening of THEARC in 2005, co-founders Chris Smith and Skip McMahon commissioned the Animatron figure of Frederick Douglass after learning of the rich legacy of the great abolitionist in his residency in the Southeast community in the Anacostia Neighborhood. The Animatron is voiced by actor Fred Marsell and was created at Advanced Animations studios.