I love the water. One of my favorite weekend activities is kayaking on the Anacostia River around Kingman Island watching majestic great blue herons fly overhead while listening the gentle sound of a paddle slicing through the water. And I know I’m not alone. I recently finished Wallace J. Nichols’ new book “Blue Mind: the Surprising Science That Shows How Being Near, In, On, or Under Water Can Make You Happier, Healthier, More Connected, and Better at What you Do” that shares his research with neuroscientists, researchers, artists, kayakers and surfers explaining our fascination with water. 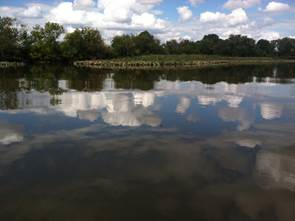 The American naturalist John Burroughs wrote “I go to nature to be soothed and healed, and have my senses put in order.” We all need that natural prescription as our e-mails, tweets and news alerts come at us like a fire house keeping our bodies in a constant state of stress. Being around water and nature can be a cure for that overstimulation. In one study described in Blue Mind, cancer patients that were shown nature videos that included sounds of ocean waves, waterfalls and splashing creeks experienced a 20 – 30% reduction in stress hormones. Take me to the water – stat! 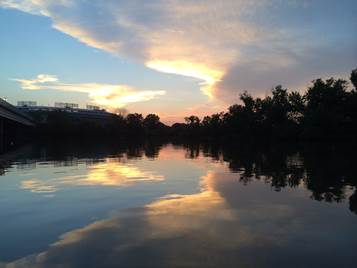 In 2011 British researchers created an app called “Mappiness” that asked users to describe their emotional state at random times during the day along with their location, who they were with and what they were doing. The app received over 1.1 million responses and as researchers began crunching the data they discovered that “the highest increase in happiness in an outdoor environment occurred when people were near water.” In fact “being in marine and coastal regions added 5.2% to a person’s level of happiness.”

We Live By the Water 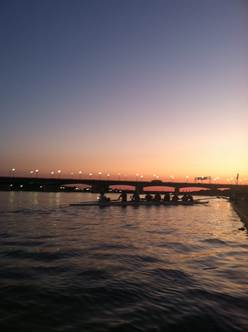 According to Blue Mind, “eighty percent of the world’s population lives within sixty miles of the coastline of an ocean, lake or river.”  I’ve always lived near the water. I was born in the East Bay of San Francisco, spent my formative years along Long Island sound, lived next to the Los Angeles River and for the last of nine years, made my home four blocks from the Anacostia River. Unfortunately it’s often challenging to access urban waterways. Freeways, train tracks and a legacy of industrial pollution have kept these natural resources just out of reach. But that’s starting to change. We need to ensure there are easy ways to get down to the river’s banks, walk along its shores or enjoy a sunset over the water. The 11th Street Bridge Park will link a larger constellation of activities and provide a stunning venue to appreciate those inspirational views.

Blue Mind provides the science and research for what we all know to be true – we love being around water. Two key goals of the 11th Street Bridge Park are to re-engage residents with the Anacostia River and to improve public health. As Dr. Nichols book shows us – these two objectives could not be more tightly linked.

To find out more about Blue Mind visit Dr. Nichols website or register for a Blue Mind seminar on May 10 at the Carnegie Institution for Science.