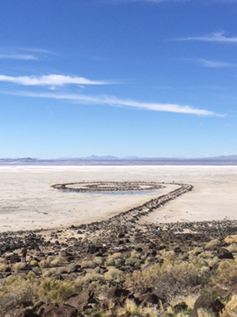 In 1970, artist Robert Smithson created one of the greatest pieces of land art in the world – the Spiral Jetty. Located along the banks of Utah’s Salt Lake and constructed with black basalt rock, dirt, sand and salt, this giant spiral winds 1500 feet into itself. Although a huge installation, what’s remarkable is that when you first arrive at the site, it feels small. The artwork is overwhelmed by the enormous empty salt flats upon which it sits. I think this was intentional. Smithson shared “the scale of the Spiral Jetty tends to fluctuate depending on where the viewer happens to be. Size determines an object, but scale determines art.”

The longer one explores the area though, the more meaningful the art becomes. Smithson wanted the viewer to participate in the experience, ponder the often uneasy relationship between people and nature. He saw the work as a vehicle to explore movement through space, time and history. In describing his work, Smithson remarked “ambiguities are admitted rather than rejected, contradictions are increased rather than decreased.”

While visiting the site, I thought about the potential for creating artwork on the future Bridge Park that can deeply engage with its environment on top of the Anacostia River. We’ve started discussions with the U.S. Geological Survey to explore installing water quality monitors along the piers of the old 11th Street bridges that can measure the river’s turbidity, oxygen levels as well as water height during storm surges. It is thrilling to think that this data could one day be displayed as part of  interactive art on the future Bridge Park. I could envision a giant lighted sculpture that glows green for clean water or bright red for dangerously low levels of oxygen due to algae blooms. Perhaps we could even collaborate with students from nearby Anacostia High School’s Environmental Science AP program. Students could regularly collect this data and share it real time via our website documenting the river’s revitalization.

Other work across the country lends additional inspiration. USGS recently collaborated with the Oregon Museum of Science and Industry on a Portland Bridge crossing the Willamette River that creates a dazzling light show responding to the Columbia River’s current, height and temperature. And Leo Villareal’s installation bathed Oakland’s Bay Bridge with 25,000 LED lights that quickly became an international sensation. What was supposed to be a temporary work will soon become a permanent beacon over the Bay.

As the Spiral Jetty demonstrates, art has the power to inform, inspire and amaze. As Smithson wrote when describing his work “one apprehends what is around one’s eyes and ears no matter how unstable or fugitive.” Here’s to engaging art, the Anacostia River and District residents with the hidden wonders of the world around us.

I would like to thank Gretchen Dietrich, Executive Director of the Utah Museum of Fine Arts for leading the tour of this amazing site. If you are interested in learning more about the Spiral Jetty you can visit the museum’s website. Thanks to the museum and the Dia Foundation for preserving this site for future generations.