I have a confession to make. I have become a bridge geek. Truss bridges, cable stay bridges, arch bridges – love ‘em all. When traveling, I almost always find myself searching out the region’s iconic spans. So during a recent trip to San Francisco, you can probably guess where I was headed – the Golden Gate.

California’s Golden Gate ranks as one of the most recognizable bridges ever built. The American Society of Civil Engineers ranks it as one of the seven wonders of the modern world. It is both functional and a work of stunning beauty. To prep for my trip to the Bay Area, I read California State Historian Kevin Starr’s “Golden Gate: The Life and Times of America’s Greatest Bridge” – an epic tale of how the bridge came to be (I told you I was a total bridge geek.) 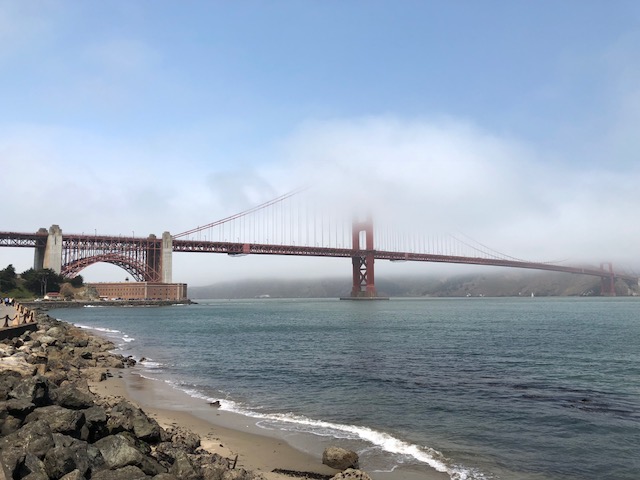 When completed in 1937, the Golden Gate was the longest and tallest suspension bridge on the planet. Historian Kevin Starr writes “the Golden Gate Bridge announced to the world something important about the American imagination.” It brought together the leading engineers of the 20th century – Joseph Strauss, Leon Moisseiff (Manhattan Bridge & Benjamin Franklin Bridge), Othmar Hermann Ammann (George Washington Bridge), Charles Derleth (Panama Pacific International Exposition) and structural engineer / mathematician Charles Alton Ellis. Interestingly, the team included an architect best known for designing opulent movie theaters, John Eberson. Eberson, along with architect Irving Morrow, gave the bridge a dramatic air. He designed the iconic towers to be stepped back and tapered with an art deco motif covered with chevron shaped plates. The bridge would continue to be prominently featured in the arts throughout its life. In the 1950s, a line of ballerinas in full attire danced beneath the bridge to promote the San Francisco Ballet. And artists from Maynard Dixon to Ray Strong (you can see his work in the Smithsonian American Art Museum’s collection) painted this orange masterpiece. 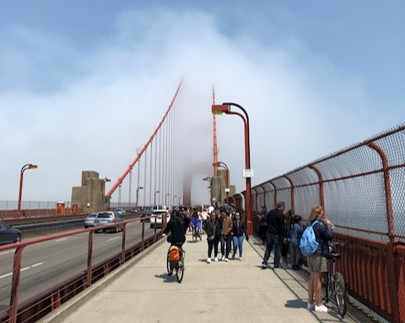 Speaking of color – the Golden Gate’s hue is instantly recognizable – international orange. As the bridge was under construction there was great disagreement on what the color should be. Its original design was gray, but that was discarded as too boring. The military wanted the bridge to be stripped yellow & black or red & white (can you imagine?) By accident, a primer of international orange was used to protect the metal against the elements and it stuck to this day.
Opening the bridge during the Great Depression was a huge deal. 200,000 people walked across the span on its first day. A week-long festival followed which included a massive flight of military aircraft and historic cars traveling across the span. A hundred vessels manned by sixty thousand officers and sailors sailed beneath the bridge – a considerable portion of the U.S. Fleet. I tried to picture the incredible pageantry as I biked the 1 mile across to the Marin headlands. 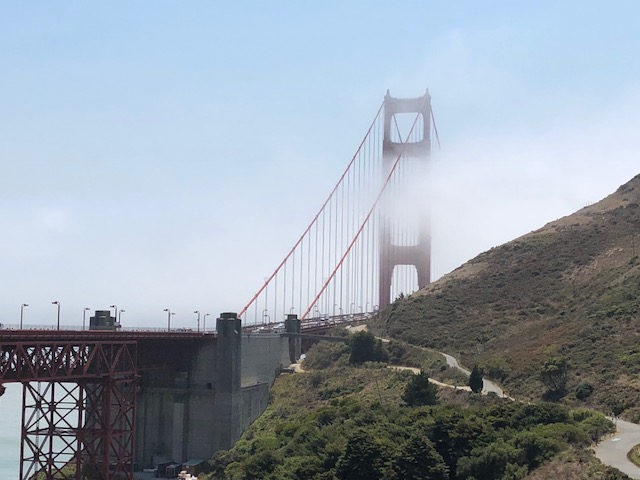 Bridges are often a reflection of their time and city. Kevin Starr writes that “the Golden Gate Bridge serves and enhances the urban identity of San Francisco.” I totally agree. The next time you hit the road, take a detour to see the local bridge. Starr poetically describes bridges as “suggested journeys between time and eternity.” Nice. And send us a picture! You can tag us @DCBridgePark.