Over the weekend, I had the opportunity to tour a newly realized bridge park in Providence, RI – the Michael Van Leesten bridge crossing the Woonasquatucket River. There are a number of similarities to what we are working to accomplish with the 11th Street Bridge Park. 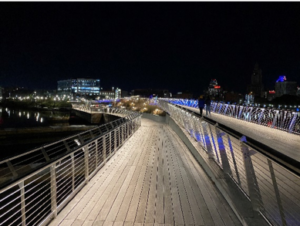 Old Infrastructure into New Civic Spaces – Inspired by an idea proposed by a RISD student, the Providence Bridge Park reused old piers from the old I-195 bridge. A competition led by the Rhode Island Department of Transportation selected designers Inform Studio and Buro Happold to create a stepped down park taking advantage of views up and down the river. The structure opened in 2019 and was recently named after Michael Van Leesten, a local civil rights advocate. We followed a similar path with an international design competition led by Building Bridges Across the River and the District Department of Transportation that selected our incredible design team of OMA+OLIN. We will be at 100% design and solicit our general contractor by the first half of next year! 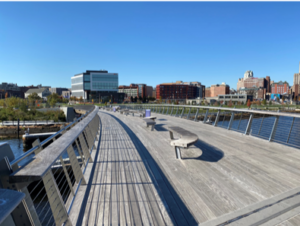 Connecting the City – The Van Leesten bridge completes a pedestrian / bike circuit along the riverfront and connects a large green space anchored in Providence’s Innovation and Design District with a commercial area and Brown University on the east bank. I sampled snacks at Plant city – a plant-based food hall and marketplace on the eastern bank which opened in 2019. When open, the 11th Street Bridge Park will reconnect the long-divided neighborhoods of Anacostia / Fairlawn and Capitol Hill / Navy Yard and connect to the Anacostia River trail. 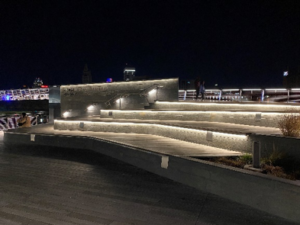 River Views! Providence’s Bridge Park wisely leverages its location for stunning views of the city’s skyline, green spaces and harbor. When I was there, park visitors gathered in a stepped down area close to the water surrounded by lush vegetation. The main span features creative (and comfortable!) benches accenting the gentle curve of the bridge. The 11th Street Bridge Park will also take advance of its location where you’ll be able to see the U.S. Capitol, Washington Monument (imagine being here on the 4th of July!), Nationals Stadium and Yards Park. 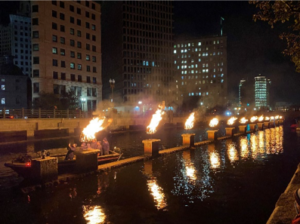 Programming! In the early 1990’s Providence opened a renewed Riverwalk, but artist Barnaby Evans was concerned that the space needed a nudge to bring folks down to the river’s banks. In 1994 he started WaterFire which has grown to 86 giant cauldrons holding wooden logs. It is SPECTACULAR and regularly draws tens of thousands of visitors. During my visit, WaterFire was celebrating Veteran’s Day with a resource fair, vintage jeeps on display and red, white and blue stars draped over the river. (The next lighting will be December 4 and themed around the holidays.) For the last seven years, we have partnered with the National Park Service and the National Cherry Blossom Festival to produce the annual Anacostia River Festival that pre-pandemic draws over 10,000 residents celebrating the river, its history and communities along its banks. Save the date for April 10, 2022 when we’ll feature music and culture of Anacostia and Capitol Hill!

It is such a joy to see inspired communities transform old infrastructure into new civic spaces. There are currently over 170 such projects in development across North America. And very soon, the 11th Street Bridge Park will be the latest to open – and first in the nation’s capital. 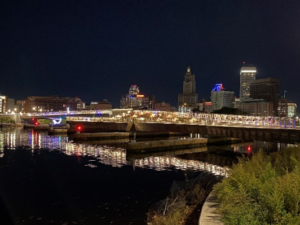