If you google “11th Street Bridge Park” and “High Line” you’ll get 3.5 million hits. Really. The media has often compared our work transforming an old D.C. freeway into a new civic space to the elevated New York City park. Next City described us as a “High Line on the Anacostia” and other news outlets made the link including articles in Wired, Fast Company, and Gizmodo just to name a few.  While flattering, the two projects are very different – the High Line’s first two sections cost more than four times our estimated construction, our Bridge Park is shorter in length but much wider in width and we are located over a river, not a busy Manhattan neighborhood. Nonetheless, there are important lessons to be learned from their wildly successful example. 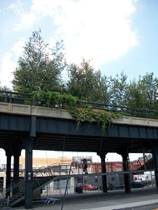 The individuals behind the High Line had a much tougher hill to climb than we do. As the first transformed infrastructure into civic space (on that kind of scale), High Line co-founders Joshua David and Robert Hammond faced an army of skeptics.  As a way to engage the public, Josh and Robbie mounted an open ideas competition to spark the public’s imagination of what could be. While the results were occasionally outlandish (two mile long lap pool or elevated roller coaster anyone?) by showcasing these concepts in well a received Grand Central station exhibition they allowed residents to dream big and visualize the park that we know today. 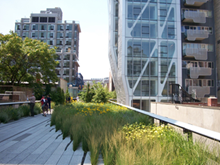 The High Line design created by the team of Field Operations and Diller Scofidio + Renfro is elegant, graceful and at times even whimsical. We were inspired by this uncompromising commitment to quality when we launched our nationwide design competition and were honored to attract some of the best design firms in the country. Needless to say, we are thrilled by the simply brilliant selected design of OMA+OLIN. 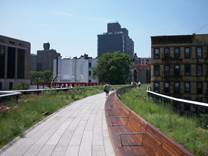 Last winter I had a long conversation with Joshua David as we were preparing to launch our design competition. Much of our discussion centered on the need to ensure that our future civic space can be self-sustaining. To that end, we built in several potential revenue streams into the design brief including leased café space, kayak / canoe facility and the ability to rent out spaces for special events. We are also including a $10 million endowment as part of our larger capital campaign.

Lesson #4 – Activate the Space Throughout the Year 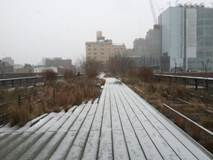 Last month I was invited to tour the High Line with then D.C. Mayor-Elect Bowser and the High Line’s Director of Park Services Tim Ries. Although it was a frigid 32 degrees outside, they were expecting over 20,000 visitors. As we build the future 11th Street Bridge Park, it is critical that we create venues that can be active in all four seasons and protect visitors from the elements. In the summer, there will be plenty of shade provided by our truss structure and in winter visitors can enjoy heated indoor spaces such as our café and environmental education center. 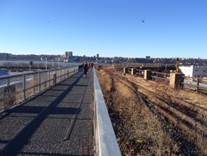 From an amphitheater framing New York’s 10th Avenue to the newest section capturing Hudson River vistas, the High Line is firmly rooted in its surroundings. The 11th Street Bridge Park responds to our location in a number of ways. We embrace the Anacostia River with a series of stunning waterfalls, kayak / canoe launch and environmental education center. We will also showcase both permanent and temporary public art that celebrates the rich heritage of historic Anacostia and the Navy Yard.

The 11th Street Bridge Park is not the High Line, nor will it ever be. But we can continue to learn from our New York colleagues along with other inspired projects such as Chicago’s 606 Trail, Atlanta’s BeltLine or Poughkeepsie’s Walkway Over the Hudson.

As we move forward realizing Washington D.C.’s 11th Street Bridge Park, here’s to inspiring future transformed infrastructure into civic spaces in a city near you.