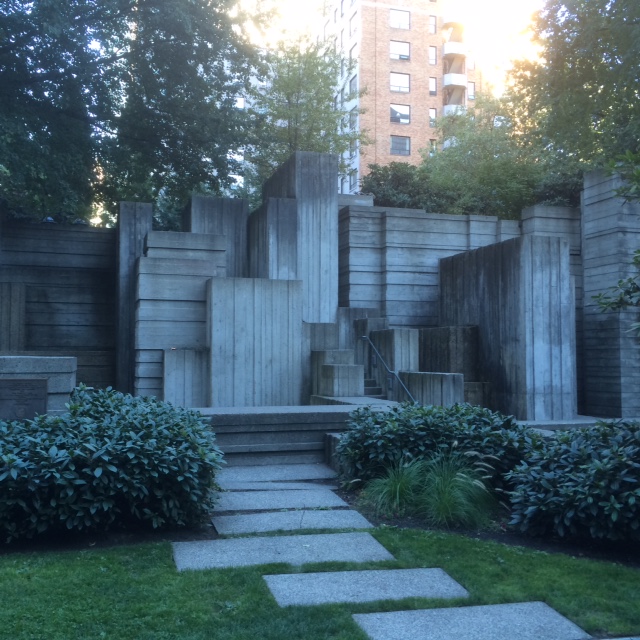 In the 1960’s the federal government began an ambitious nationwide effort to connect cities across the U.S. through the construction of freeways. But this infrastructure also divided communities with eight lanes of traffic snaking through residential and commercial districts. This was true in Seattle, Washington as I discovered on a recent trip.

The 5 Freeway is the major interstate along the West coast. In Seattle, it slices through downtown and created a giant scar separating downtown with the neighborhood of Capitol Hill. In an effort to remedy this pedestrian challenge, landscape architect Angela Danadjieva (working for Lawrence Halperin’s office) decked over four blocks of the freeway establishing zig zag paths and large planter boxes perched above racing cars and tractor trailers. The park opened on July 4th, 1976 and features a series of waterfalls nestled in a lush landscape of trees, bushes and flowers which masks the white noise of roaring traffic below. 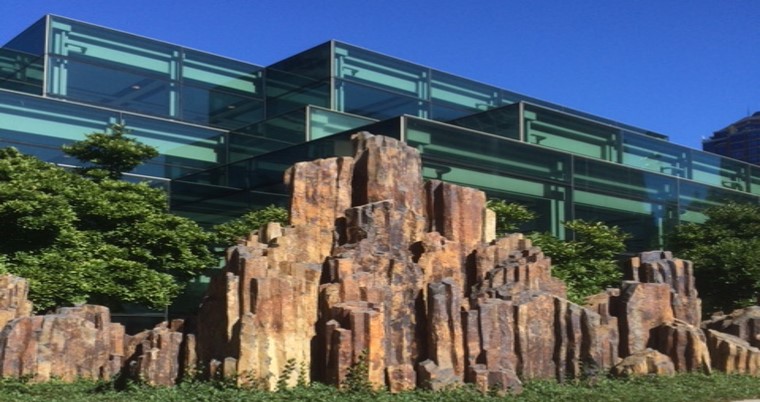 Large brutalist concrete towers make way for walkways connecting 6th to 9th Avenues dotted with public art. One criticism of the park is that narrow stairwells and sharp corners create the perception of an unsafe space. Parks designed today incorporate open viewsheds providing a sense of security. However, as the noted planner Jane Jacobs discovered, lasting security comes with “eyes on the street. ” In her seminal work “The Death and Life of Great American Cities” Jacobs explains that active, lively and populated spaces ensure the safety of both residents and strangers. At Freeway Park, this is accomplished by incorporating seamless connections to the busy Washington State Convention and Trade Center. Even the Convention Center’s design matches the boxy geometric look of the park’s framework.

Signage is key to any urban amenity ensuring that visitors know how to find the space from adjacent city streets and understand which way to travel when exploring inside the park. This seems like a small issue, but without clear wayfinding visitors can easily become lost and frustrated. Mounted signs are visible inside the park, from nearby sidewalks and even inside the Convention Center directing bleary convention goers to peaceful (and sometimes sunny) outside gardens.

As we work to undo the damage of infrastructure that unintentionally divided neighborhoods and prioritized vehicles over walkable environments, there is much to learn from places like Freeway Park. Forty years later, we are following in Seattle’s footsteps by decking over D.C.’s 395 freeway re-connecting Penn Quarter with NoMa. And at the 11th Street Bridge Park, we are working to repurpose an aged out bridge into a new civic space linking neighborhoods east and west of the Anacostia River. Today, I think we can all agree that we need a little more civic space especially in the nation’s capital.