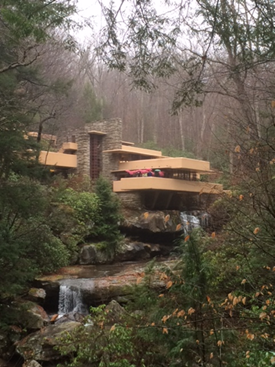 A recent visit to Frank Lloyd Wright’s Fallingwater led me to think about the relationship between architecture and nature as our own Bridge Park responds to the hidden beauty of the Anacostia River.

Designed for the Kauffman family in southwestern Pennsylvania in the 1930’s, Fallingwater features a series of cantilevered geometric trays stacked above three natural waterfalls. As the name implies, the design is singularly focused on the creek running underneath the house. Every room beckons the visitor to step outside on to balconies and enjoy the stunning views. Even on the third floor, Wright created delightful corner windows hinged on opposite sides to give the viewer an unobstructed view down the woody ravine and opportunity to hear the rush of water coursing over rocks below. 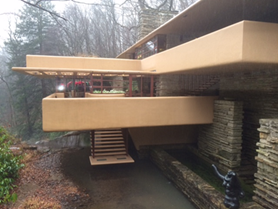 The house features two swimming pools – one nestled against the creek with giant stairs leading from the main living room through a telescoping glass and steel hatch. Stones quarried on site were used to create a three story fireplace that forms the structure’s main spine. In the dining room, Wright used an enormous boulder resting in the hillside as the foundation for a massive fireplace. It’s clear why the house was named the “best all-time work of American architecture” by the American Institute of Architects. In 1963, the house was donated to the Western Pennsylvania Conservancy that now offers site tours throughout the year.

During the tour, I kept thinking about how the 11th Street Bridge Park responds to its surroundings – specifically the Anacostia River that flows beneath the bridge. During last year’s design competition, the relationship with the river was so important that it was called out in two design principles that were used to select the final design. The competition brief stated that the Bridge Park should “engage with the river” and physically and metaphorically “touch the water.” The brilliant design by OMA+OLIN accomplished this goal by celebrating river viewsheds across the park, allowing access through a kayak / canoe launch and dramatic waterfalls greeting visitors at both park entrances.

I am by no means comparing the Bridge Park to one of the greatest pieces of architecture in the country, but we can be inspired by such masterpieces as we work with the community to refine this future civic space. We can learn from Wright’s effortless blend of landscape and design. At the dedication of the property in 1963, Edgar Kauffman Jr. remarked that “Fallingwater was created by Frank Lloyd Wright as a declaration that in nature man finds his spiritual as well as his physical energies, that a harmonious response to nature yields the poetry and joy that nourish human living.” Here’s to finding continuous joy in the poetry of the Anacostia River as we move forward.