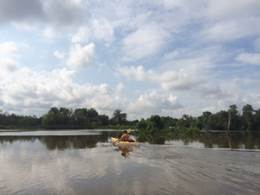 Throughout history, rivers have served as connectors linking villages, cities and entire regions. The Anacostia River once linked Washington D.C. with the busy port town of Bladensburg, Maryland. Ships laden with tobacco and agricultural crops would sail down the river out to the Chesapeake Bay and eventually the Atlantic Ocean. But in the 19th century the river silted up, we used the watershed as a dumping ground and we no longer viewed the Anacostia as a valuable natural resource but a place to avoid and ultimately ignore. But the river is resilient.

Last week I took my kayak on a nautical adventure along with fellow adventurer Jim Epstein. Early in the morning we slipped our kayaks into the water near D.C.’s Pennsylvania Avenue bridge with a destination in mind – Bladensburg or bust! Heading upstream, we glided under the CSX train tracks that serve a final barrier for larger boats. 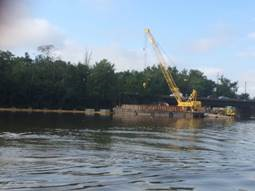 The river becomes serene, pastoral and wild up here. The rowers from Catholic University call this stretch “Narnia” – inspired by the magical world of C.S. Lewis. Bordered by the National Arboretum on one side and the National Park Service’s Kenilworth Aquatic Center on the other, birds are plentiful – osprey, great blue herons and the occasional bald eagle soared overhead. Heading under the New York Avenue bridge we saw construction workers building the new Anacostia River Trail which will open next spring and provide a contiguous bike route from South Capitol Bridge all the way to College Park, Maryland. We can’t wait to use this trail at our 2016 Anacostia River Festival! 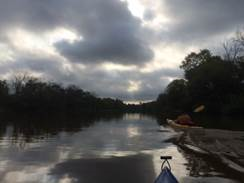 With projects like this new bike trail, the river is poised to once again become a connector – linking residents and tourists alike to the river, its history and the vibrant communities that line its banks. Groups like the Anacostia Watershed Society, Anacostia Riverkeepers, Earth Conservation Corps and Groundworks Anacostia have been working for decades to restore this aquatic resource and we all owe them an enormous thank you. And organizations like the Federal City Council are diligently meeting with local and federal agencies like our friends at the National Park Service to create a holistic master plan for the river’s future. We are humbled to partner with these organizations and will soon add another turning point in the river’s history by opening the 11th Street Bridge Park. Here’s to inspiring the next generation of river stewards from D.C. all the way to Bladensburg.