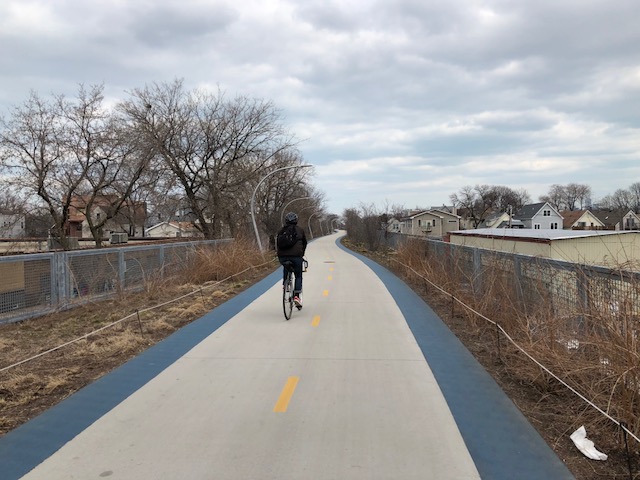 In 1913, the Chicago, Milwaukee, St. Paul & Pacific Railroad Company elevated 2.7 miles of train tracks through the neighborhoods of Wicker Park, Bucktown, Humboldt Park and Logan Square. One hundred years later, use slowed and freight service eventually completely stopped. Cue local residents who began advocating for a multi-use trail that could both connect neighborhoods and form an impromptu nature trail in the middle of the city. After many years of hard work, the Friends of the Bloomingdale Trail, Trust for Public Land and city officials opened what is now known as The 606 Trail. I recently had the chance to tour this amazing civic space with Chicago Parks District staff Vivian Garcia who is the manager of the 606 trail. 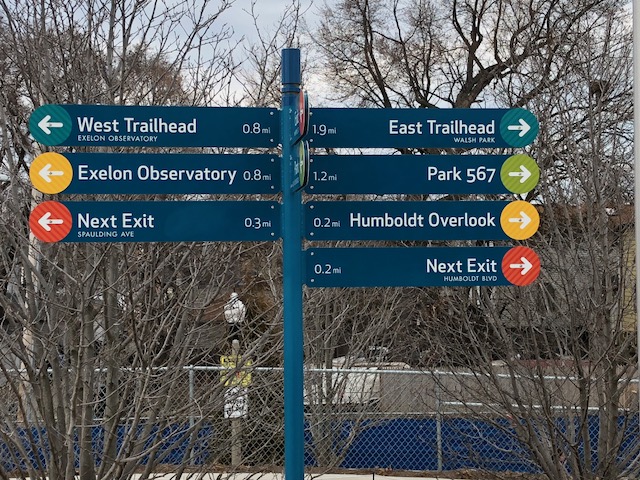 Although it was a chilly April day (it snowed the day before!) the trail was well used with families taking an afternoon stroll and bike commuters whizzing by. Joggers exercising ran on by and teenagers hung out on an overlook perched above adjacent neighborhoods. The Chicago Parks District regularly programs the space including star viewing and even camping with local youth! Giant public art is installed throughout the trail along with helpful signage providing an easy to read geographic orientation. Special soft material was installed on either side of the trail for runners (those are the blue stripes in the pictures.) The plantings designed by landscape architect Michael Van Valkenburgh include quaking aspen that provide a beautiful soundscape, a sumac forest and serviceberry bushes that can be harvested by the public. Talk about your urban agriculture! As the park is situated perpendicularly towards Lake Michigan, the plants bloom at varying times of the year due to the lake effect. The Parks District has a citizen scientist program documenting the turn of the seasons – a fantastic way to engage local residents.

The 606 is another example of transforming aged out infrastructure into a cherished civic space connecting communities. Next time you find yourself in the Windy City, take the CTA Blue Line to see this magical trail!