A few weeks ago I volunteered for the 11th Street Bridge Park at the opening of the Ward 8 Farmer’s market at Building Bridges Across the River at THEARC. I live in the Fairlawn neighborhood east of the river.  Although Anacostia Park is ten blocks from where I reside, I consider it my backyard. I volunteer with the 11th Street Bridge Park because I support urban infrastructure reuse and bringing amenities to under served neighborhoods. I love how Anacostia Park brings together people from various socioeconomic backgrounds, which is also a key goal of the 11th Street Bridge Park. I happened to mentioned to Scott Kratz, Director of the 11th Street Bridge Park, that I was headed to Chattanooga, Tennessee to visit a friend who had moved there from Atlanta last year. I’ve had the opportunity to visit the city a couple of times since her move. Scott and I discussed how Chattanooga utilizes placemaking as a tool for economic revitalization, enhanced civic engagement, and environmental awareness. 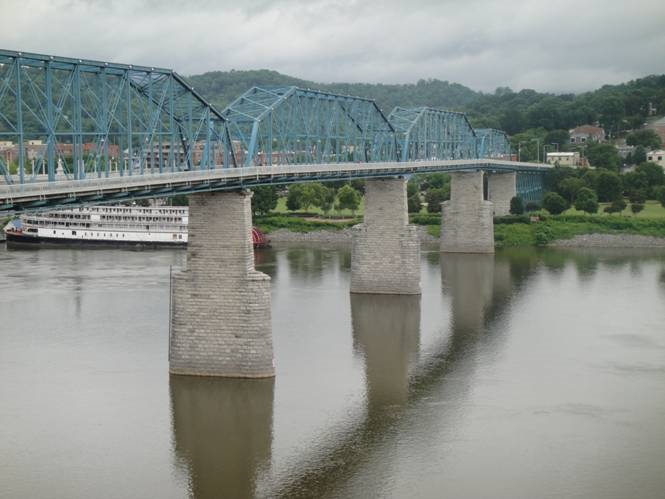 View of the Walnut Street Bridge and the North Shore from the Hunter Museum of American Art. On the left, docked at Coolidge Park Landing, is the Delta Queen which is an American sternwheel steamboat that now serves as a floating hotel and bar.

Eastern Tennessee’s history is unlike most other southern regions. Forced Indian removal, pre-civil war Union support, a heavy manufacturing-driven economy, and decades of residential segregation constitute a complex regional narrative. In 1969 a federal environmental quality report designated Chattanooga’s air as the most polluted city in the United States. Deindustrialization, population decline, and environmental degradation had taken its toll on the city.  In response, a group of citizens, labor and business leaders, local foundations, and city officials organized and developed a road map for the difficult transition to a post-industrial economy with the riverfront as a central component of economic development. A combination of public-private partnerships and extensive community involvement led to the creation of the 22-mile regional Riverwalk (of which a portion has been built), the Tennessee Aquarium, an urban design studio at the School of Architecture at the University of Tennessee at Chattanooga, affordable housing, family shelters, market-rate housing on empty lots, and downtown plazas. In addition, a plan for the preservation of the Walnut Street Bridge was implemented. 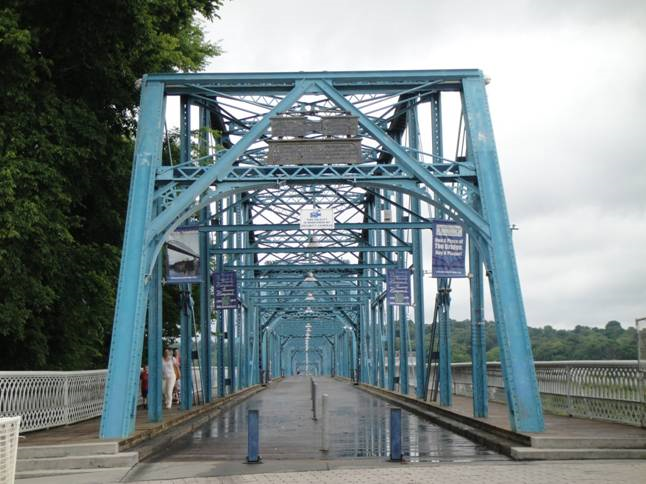 Entrance to the Walnut Street Bridge on the downtown side.

The Walnut Street Bridge, previously known simply as the county bridge, is a wrought-iron and steel through truss bridge that spans the Tennessee River in Chattanooga, connecting downtown to the North Shore. The bridge, designed by renowned civil engineer and inventor Edwin Thacher, was completed in 1881 and after 107 years of use it was closed to traffic in 1978 due to safety issues. It was the first bridge built across the Tennessee River for non-military purposes.

Community groups and local foundations that had been involved in riverfront and downtown revitalization directed their energy towards stopping demolition of the bridge. The repurposed walking bridge would serve as another component in bringing the community back to Chattanooga’s urban core and along the riverfront. In 1990 the Walnut Street Bridge was added to the National Register of Historic Places and saved from demolition. A combination of federal, city, and foundation support raised the funds required for restoration. The Walnut Street Bridge reopened as walking bridge and linear park in 1993; it is among the longest pedestrian bridges in the world. The bridge is free and open 24 hours a day. It serves as the location for an  annual wine festival and small civic events. Bike Chattanooga has bikeshare locations situated at both ends of the bridge. Residents and city visitors utilize the bridge to watch fireworks, enjoy the music from the many music festivals in the park below, and to easily reach the public spaces, restaurants, and amenities on both sides of the Tennessee River. 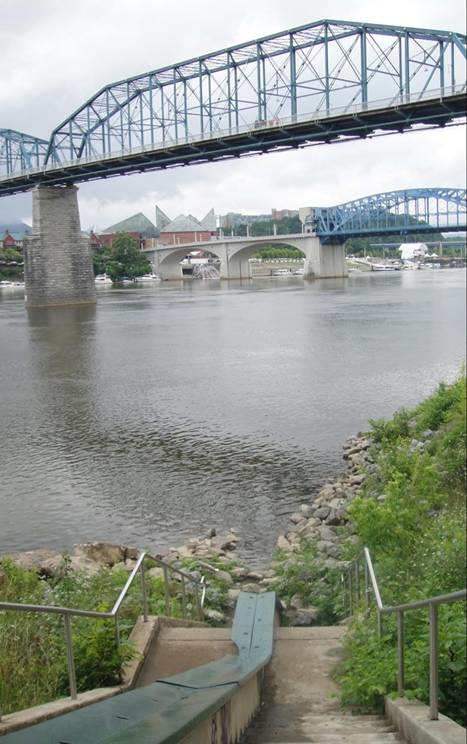 On the North Shore side of the river, a canoe and kayak River Launch was built in Renaissance Park for public use. The Tennessee Aquarium, Ross’s Landing, and The Passage can be seen in the background beyond the Market Street Bridge.

The Walnut Street Bridge spurred development adjacent to downtown and on the North Shore of the river. An amphitheater built along the Riverwalk is home to the Annual Riverbend Festival; the Hunter Museum of American Art built a third building as part of their campus; a public park space was expanded on the North Shore; and, retail and residential development in the city has grown. Additional community spaces have been built around the aquarium, including The Passage, known as the Trail of Tears Memorial. The Walnut Street Bridge and the surrounding public spaces continue to act as a center for active recreation, tourism, and community interaction. Most notably, changes in city infrastructure mirrored the growth of social capital across all sectors of the population. New governance structures–from a commission style government to a city council and mayor system (similar to DC)–have resulted in more racially diverse representation in the city. While many challenges remain, in 30 years Chattanooga has transformed itself from a city where residents drove during the day with headlights on to see through the dense haze of pollution to a city that draws tourists and tech entrepreneurs, and where all families can live in a healthy environment. The Walnut Street Bridge has played a starring role in that transformation. 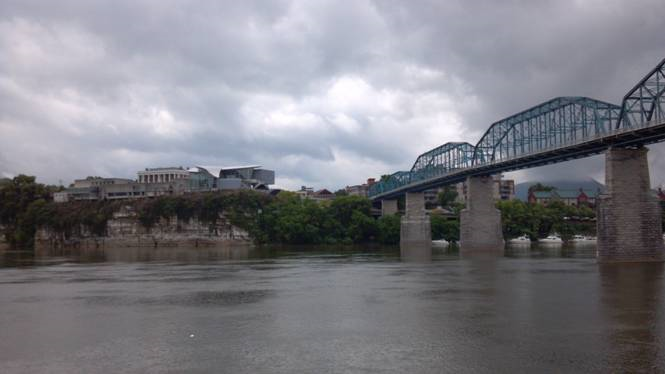 View of the Walnut Street Bridge from Coolidge Park on the North Shore side of the river with the Hunter Museum of American Art complex and the Bluff View Art District on the bluff to the left.