When someone talks about temporary public installations, the first thing that comes to mind might be works of art. A rising trend around the world has shown that designers are taking these types of projects to a new level, going beyond the art and creating aesthetic public spaces to animate city centers. 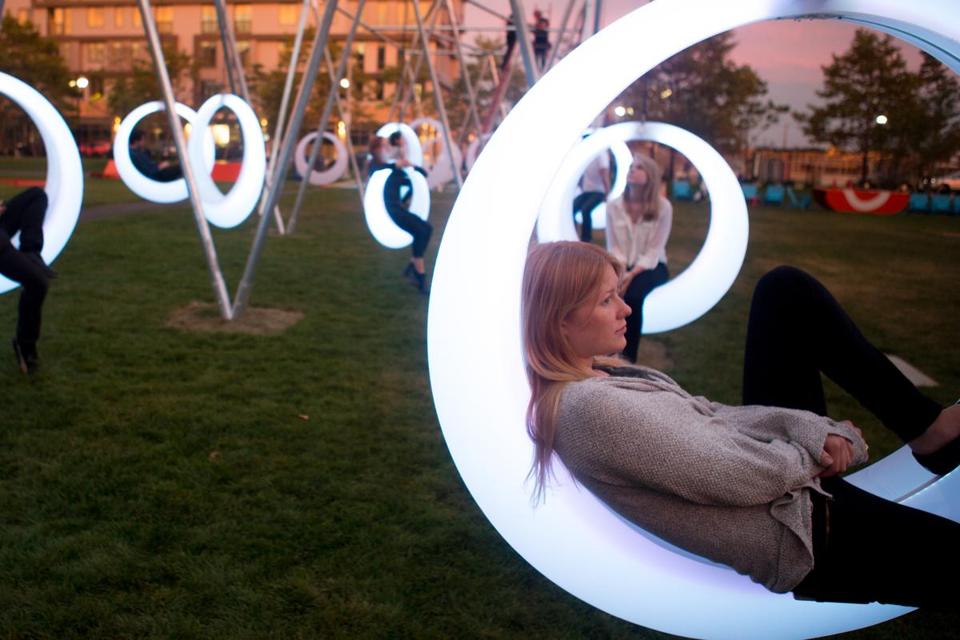 Temporary installations in urban areas attract lots of people. Realizing the power that such pieces have in creating destinations, cities have hired firms to design works intended to bring together residents and tourists alike.
Last year, the firm Höweler + Yoon Architecture (one of our four finalists as part of last year’s Bridge Park design competition) created “Swing Time”, an amazing interactive playscape where adults and kids can swing from 20 suspended rings in Boston’s Seaport district. This area previously known as the South Boston Waterfront, has been undergoing revitalization projects to animate the area. Swing Time was a catalyst for increased visitors setting the stage for the future more permanent civic space.

Semi-permanent interventions can often bring awareness to an issue or topic. In 2012, AFJD, a two-person design and research firm, was commissioned to create an urban public space installation to promote Vancouver’s initiative to become the greenest city in the world by 2020. The firm has a commitment to  only employing sustainable methods and materials in their works, so “Pop Rocks” was created entirely of post-consumer waste repurposed industrial materials which they incorporated into their installation – a series of loungable furniture activating a large plaza. 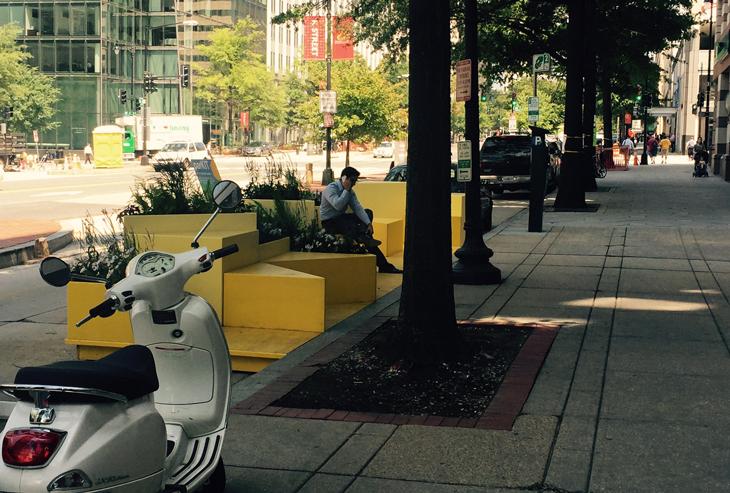 Following this trend of pop-up civic spaces, Washington D.C. has taken an interest in parklets – small parks created in metered parking spaces adjoining sidewalks. Based off of a similar initiative that began in San Francisco, Park(ing) Day came to D.C. in 2013 and for the first time allowed residents to create 1-day parklets around the city. Acting as an outdoor activity generator, these parks also highlighted the need for more public space Gensler, a renowned architecture, design, and planning firm challenged their D.C. employees to design a parklet for the city in partnership with the  Golden Triangle Business Improvement District. You can experience their solution – “ParKIT”  at 2020 K Street outside of Gensler’s offices.

A Bridge Park Beach?
As a way to activate the space near the future Bridge Park, we are planning  a temporary public space for city dwellers to enjoy the sun and sand without having to cross D.C. lines. Called the “Anacostia Beach” this temporary installation will   be created on the east bank of the river, at the base of the 11th Street Bridge and programmed with fun beach activities. While we can’t yet swim in the river, this intervention will provide a wonderful testing ground for the future (and more permanent) Bridge Park. Hope to see you at next year’s beach!

Want to learn more about parks and small social spaces?
William H. Whyte was one of the most influential urbanists of the 20th century; his research and finding is still studied today. His most famous work is a still relevant documentary entitled The Social Life of Small Urban Spaces which outlines the aspects of great public spaces.