For more than 130 years, Bethlehem, Pennsylvania was one of the largest producers of steel in the country. Bethlehem Steel was the birthplace of the now ubiquitous i-beam used in steel framed buildings across the U.S. In 1995 this all came to an end. The enormous blast furnaces that formed metal for the Golden Gate Bridge, the Chrysler building and the worlds’ first Ferris Wheel, closed its doors and declared bankruptcy in 2001. This was crushing to the area’s economy as the company represented more than 20% of its tax base and at its height employed over 30,000 workers. To help revive the region, wise folks created an amazing cultural center called ArtsQuest which today hosts Musikfest – America’s largest free music festival and supplies a stunning range of arts programming. ArtsQuest draws millions of visitors every year and generates over $100 million annually for the city.

During a recent visit, ArtsQuest President and COO Kassie Hilgert provided a tour around the site. There were several takeaways as we work to transform our aged out freeway into the 11th Street Bridge Park. 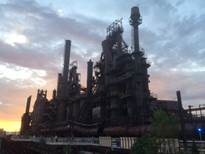 Honor Your History When you arrive in South Bethlehem you cannot miss the 500 foot tall steel stacks. It is difficult to convey the size and scale of this machinery. Where some saw blight, the creators of ArtQuest saw opportunity. Staff recently opened the Hoover Mason Trestle, an elevated walkway through this rusted industrial monster that is reminiscent of New York’s High Line. Interpretive signage along the way shares the rich history of the plant where you can still see names of workers long ago welded into the machinery. This was inspirational as we explore inventive ways to honor D.C.’s past such as John Smith’s 1608 journey up the Anacostia River, the 200 year old U.S. Navy Yard and the fact that Frederick Douglas used to cross the Anacostia River every day on his way to work. 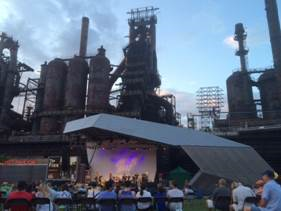 Mix It Up! Provide Diverse Programming The programming during MusikFest is incredibly diverse and intentionally so. During the 10 day August festival, you can hear salsa, soul, rock and folk music drawing a very mixed audience. On the day I visited, you could hear Motown, children’s world music and a classical choir, all steps away from each other.  And what was once the steel blast furnaces now frames the Levitt Pavilion which presents 50 free concerts every year. As we partner with the Washington Performing Arts over the next year to provide programming east of the river, we look forward to representing the wonderful culture and diversity of our surrounding neighborhoods. 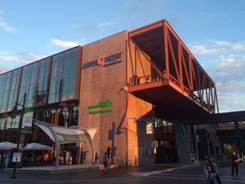 Collaborate, Collaborate, Collaborate! ArtsQuest’s Banana Factory offers a rich mix of programming that includes Pennsylvania Youth Theatre, dozens of working art studios, a digital imaging center, a ceramics studio and a commercial gallery. Named after a storage facility for – you guessed it, bananas – this beautiful space is similar to our campus at THEARC pulling from the expertise of a number of cultural providers. At the Steelstacks center you’ll find an art house theater, café and additional music venues. As we move forward with the Bridge Park, we plan to operate in a similar way turning to content specialists to help program our environmental education center, urban gardens and outdoor performance venue.

I encourage you to visit this special location. They have events throughout the year including an amazing Christmas Market in November / December.  I would like to thank Kassie Hilgert and her Executive Assistant Joann Ring for being such wonderful hosts and providing a tour of their impressive center!