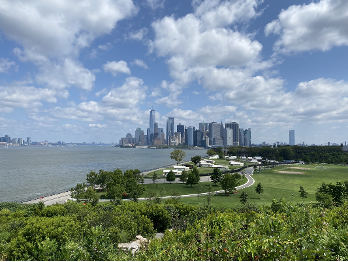 This past week I traveled to New York touring civic spaces with our amazing design team from OMA+OLIN. We’d like to give an enormous thank you to the staff at Governor’s Island, Brooklyn Bridge Park and Domino Park for taking the time to show us around and answer our many questions! We wanted to share several lessons learned as we charge ahead to finalizing construction drawings early next year. 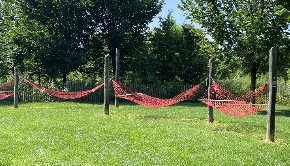 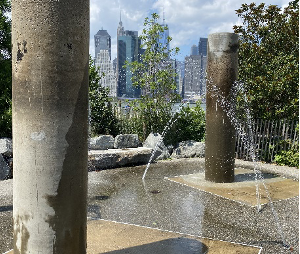 These three parks incorporate historical elements into their design. Brooklyn’s Domino Park was built on the site of an obsolete Domino Sugar factory. Giant gantries are painted a colorful teal and anchor the north edge of the park. The building’s rusted frame was salvaged and frames an outdoor seating area and the original neon Domino sign will soon be reinstalled at the park. Brooklyn Bridge Park relocated giant concrete dock piers which are the central element of a splash pad. And Governor’s Island repurposed huge stone blocks that once served as a sea wall intro climbing steps providing an alternate path to the “Hills” – a 360 degree view of Brooklyn, Statue of Liberty, Ellis Island and lower Manhattan. This makes me wonder how we can incorporate the rich history of our surrounding neighborhoods such as the US Navy Yard or historic Anacostia. We welcome your ideas! 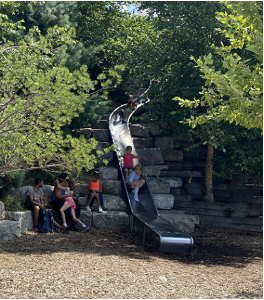 Playgrounds are spaces that naturally bring together people who otherwise might not cross paths and each of these parks use inventive open play design. Governors Island has a number of play spaces including “Slide Hill” – a 57 foot curving path that is three stories tall! Brooklyn Bridge Park features several playgrounds including a giant sailboat, sandbox village and two swing areas. Domino Park’s playspace was designed by Brooklyn based artist Mark Reigelman that takes kids on a fun journey through 150 years of sugar production that happened on site. We will soon work with a playground consultant to design our own Mussel Beach inspired by native mussels in the Anacostia River! 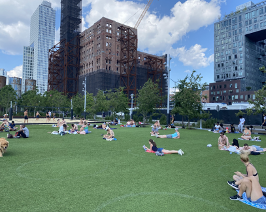 Parks should not overlook basic amenities such as water stations, clean family friendly restrooms, trash receptacles, affordable food options and shade – lots of shade! Governor’s Island features a number of pop up food stands and more permanent restaurants as does Brooklyn Bridge Park. The entire design team enjoyed tasty tacos at Tacocina located in the center of Domino park. As we finalize the Bridge Park’s design, we are locating a café next to the central plaza and ensuring a continuous shaded path across the bridge – those DC summers are warm!

It was a whirlwind and valuable trip up north – excited to get back to finetuning the Bridge Park’s design. Stay tuned for our next public meeting this fall where we’ll share our latest renderings and solicit your feedback. In the meantime, continue to enjoy your local parks! 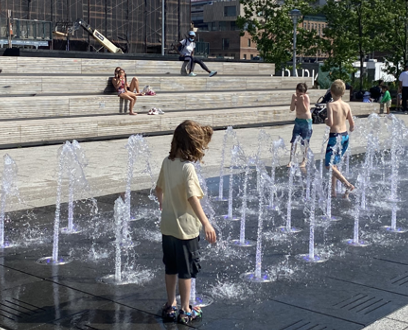